Bewketu Seyoum is an Ethiopian writer, poet, essayist, and humorist. He was born in Mankusa and has a degree in psychology from Addis Ababa University. He has written six books of stories, poetry novels, and collections of essays in English and his native language Amarhic. Both in his writing and his comedic performance he explores issues of corruption, police brutality, and cultural and political repression in his home country.

Seyoum is a prolific writer who published his first collection of poems, Nwari Alba Gojowoch (Unmanned Cottage) in 2000, a year after graduating. Since then he has published four further poetry collections, a book of short stories, two novels, a collection of essays, and has narrated a collection of humorous short stories on CD. Translations of Seyoum’s writing available in English include a 2012 volume of poetry, In Search of Fat, and selections in Modern Poetry in Translation – The Big Green Issue. His work has also appeared in English in the literary magazines Prairie Schooner, Callaloo, and World Literature. He was the recipient of the award for the Ethiopian Best Novelist of the Year in 2008 and Best Young Author in 2009. 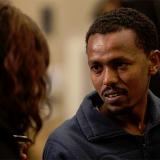 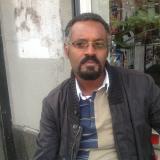