As a self-learned cartoonist in Bangladesh, Arifur Rahman worked for one of the biggest newspapers. He was arrested in 2007 for the sake of a cartoon for children of an old myth, which the Islamic Party of Bangladesh found controversial. After six months in prison, Rahman was released but still faced many difficulties and threats of being arrested again.

In 2010 he arrived in Norway and Drøbak as the city's first ICORN guest writer. 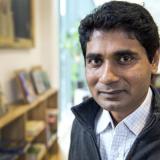