Babak Salimizadeh, is new ICORN guest writer in Norrköping, Sweden. Together with his colleagues Elham Malekpour and Maryam Sheikh, he will take part in a series of events together with Bosnian writers and activists in Tuzla and Sarajevo between 28 September and 2 October.

A distinguished writer and poet, translator and social theorist, Babak Salimizadeh is known for his performances in the field of poetry and art as well as writings and cultural activism, which tackle the themes of queer theory, literature, aesthetics and politics.

In these public events and workshops, through an exchange of artistic and literary interventions, artists and activists will discuss the violence of neo-liberal policies and exchange understandings about the current social movements in both Iran and Bosnia and Herzegovina – their past, present and future. Producing new lines of resistance in social, artistic, and literary practices will be the focus of these events.

Coordinating the events of their visit will be Bosnian writer and activist Dr. Damir Arsenijevic.

The rise of anti-LGBT legislation & Freedom of Expression

Babak Salimizadeh arrived in Norrköping city of refuge in January 2015, and has since participated in a number of debates and events, among others at the ICORN Network Meeting in Amsterdam and the Göteborg Book Fair. He participated in the panel discussion at the WiPC Conference and ICORN Network Meeting on the theme the rise of anti-LGBT legislation & Freedom of Expression.

Babak Salimizadeh is a distinguished writer and poet, translator and social theoristis, and the chief editor of Mindmotor Magazine, which has been dealing with critical theory, art and literature since 2007. He is also a member of the editorial board of Iranian Sexuality Studies Group (ISSG) since 2011.

In his home country, Iran, he organized and wrote for many underground magazines, including Zoghal magazine (2004-present), a vehicle for the creation and dissemination of protest art in Iran; Artcult magazine (2006-2008); the cultural-artistic organ of leftist student movements in Iran. In addition, he was a strategist for Parallel Academy – a movement organized by students and academics to fight state repression of the human sciences (2009).

Salimizadeh holds a Master of Art Research from Payame Nour University of Tehran. He ranked 5th and got accepted for PhD program in Tehran University of Art, but the Iranian Government made it impossible for Babak Salimizadeh to continue his education in the higher level and after a number of threats and interrogations as a result of his writings, he fled Iran and left for Turkey in 2013. Babak says:

“I hope that I will be better able to resume my poetry, working on some video/audio performances as well as resuming my researches on queer art and theory during my ICORN residency. Perhaps I can even take up a PhD and continue my education while here in Sweden.”

The events Producing new lines of resistance in social, artistic, and literary practices in Tuzla and Sarajevo between 28 September and 2 October are supported by PEN International and the Museum of Literature and Performing Arts in Sarajevo, in collaboration with PEN Bosnia and Herzegovina. 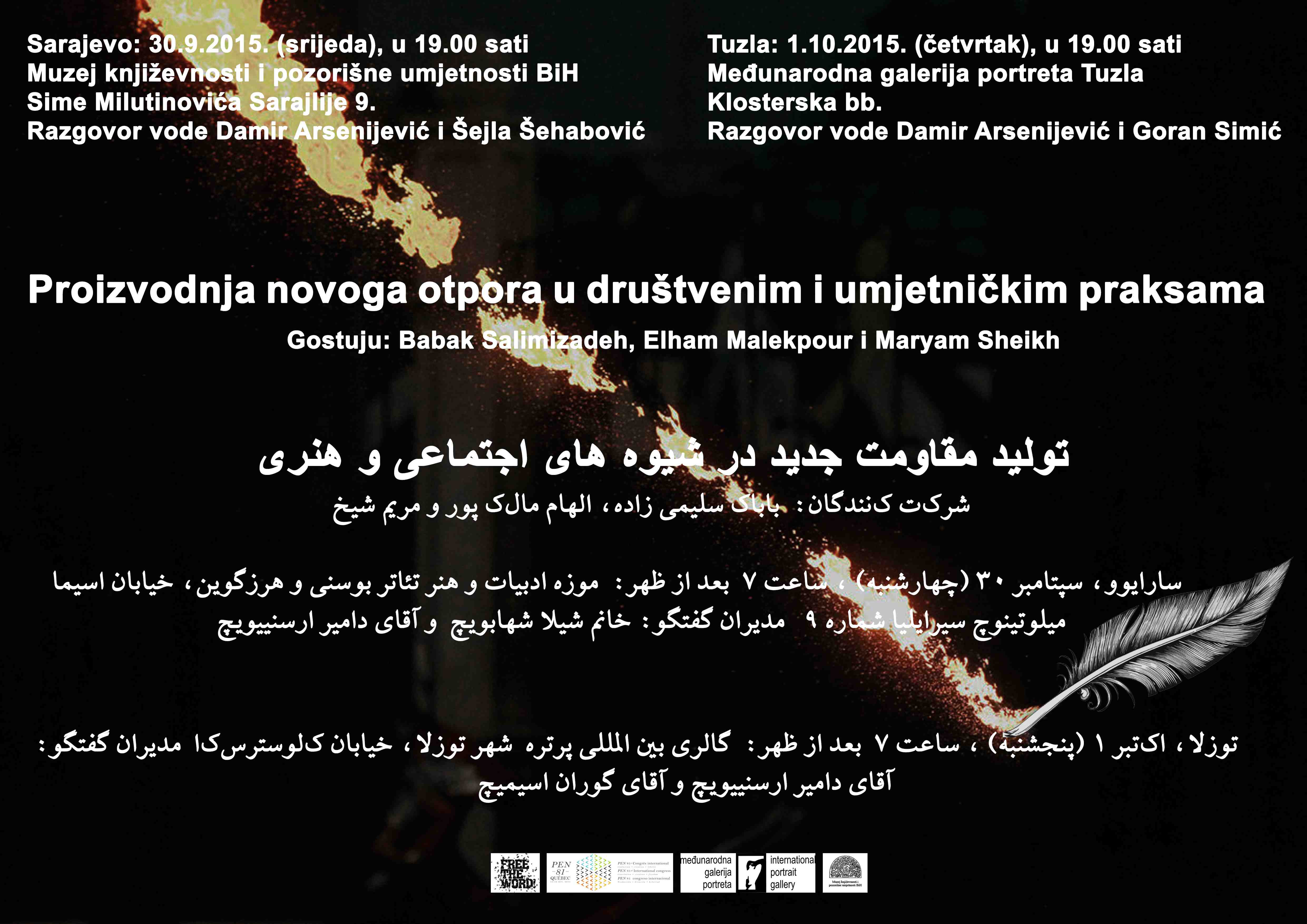 More than 70 cities around the globe offer a safe space where writers and artists at risk can live and work through the ICORN programme.

Application guide for writers and artists at risk

Below is a guide to how to apply for an ICORN residency. It includes information about our requirements for a residency and the evaluation process. Please read carefully before applying.